Investors eagerly await Uber’s (UBER) impending IPO and with good reasons. It’s not every day you get an opportunity to invest in an industry – ride-sharing – founder and leader. Uber’s successes and travails are legendary and, soon, you’ll have an opportunity to share in its ownership. Now is the time for a sober, unemotional examination of Uber’s recent operating performance. Here are several observations derived from Uber’s recent S-1 registration statement, filed with the SEC on April 26, 2019.

One is struck by the sharp drop in the 2018 revenue growth rate (42%). True, following a fast growth period, a certain slowdown is expected, but this 2018 slowdown seems a bit early in Uber’s game. The quarterly revenues confirm the slowdown – third and fourth quarters 2018 and first quarter 2019 (estimated) revenues were rather flat: $2,944 million, $2,974 million, and $3,075 million (mid high-low), respectively. Is competition taking its toll or is it the constant push-back from cities and taxi drivers? In any case, Uber’s road ahead surely appears challenging.

2. Cost Control. Surprising: Uber isn’t profitable. Many companies at this stage aren’t. The path to profitability lies in revenue growth and/or cost containment. Revenues were discussed above. What about costs?

Cost of Revenue (platform insurance expenses, credit card processing fees, data center expenses, etc.) constitute half of Uber’s revenues, and their share was: 58%, 52%, and 50%, respectively, in 2016-2018. A moderate decrease, which, again, slowed down in 2018. Sales and Marketing, the second largest cost item, decreased from 41% of revenues in 2016 to 28% in 2018. Obviously, a successful case of cost containment (partly due to the fixed component of some of these costs). General and administrative expenses’ share of revenues also decreased from 26% in 2016 to 18% in 2018. All in all, a promising cost containment.

We expect core platform contribution margin to remain negative in the near term due to, among other factors, competition in ride-sharing and planned investments in Uber Eats…”

Top-line growth is obviously the main issues. Can it come from new investments?

Research and development expenses consist primarily of compensation expenses for engineers, product development, and design employees, expenses associated with ongoing improvements to, and maintenance of, our platform offerings … as well as allocated overhead…”

The actual amounts of platform maintenance and allocated overhead (which overhead?) aren’t provided, but strictly speaking, these items are not R&D in my book. Would be nice to get more detail about this potential growth generator.

As a measure of innovations for growth, R&D is a noisy indicator. First, it’s not clearly defined by GAAP. Companies often include in R&D various remotely related items, such as quality control and maintenance. More importantly, R&D is an input measure – what you spent – rather than what you achieved (new products, processes, etc.). Patents, in contrast, are an output innovation measure. The U.S. Patent Office enables us to gauge early on the patenting activities of companies by publicly disclosing the filed patent application document 18 months after filing date and long before patent grant (“pre-grant disclosures”).

Below are Uber’s 18-month patent disclosures by year, showing an impressive rise in patenting: 220 new patent application disclosures in 2018 and 122 in the first four months of 2019. This is clearly a promising indication of Uber’s innovativeness, hopefully, leading to new sources of growth. 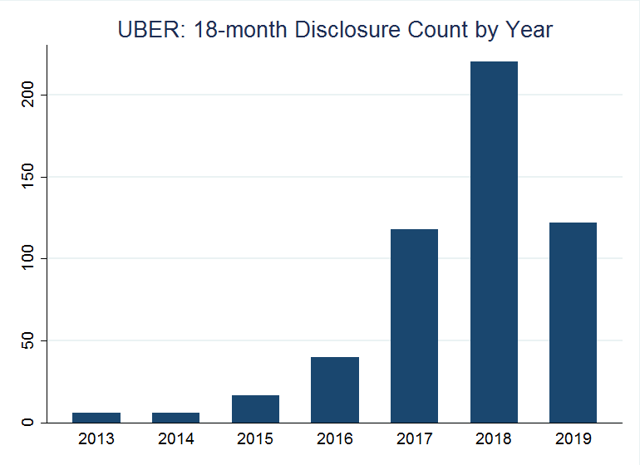 Acquisitions and new businesses are another growth generator. Uber Eats (food delivery) is still small but grows nicely: from $103 million in 2016 to $1,460 million in 2018. The competition in this field is, however, stiff. Uber isn’t a prolific acquirer, which isn’t a bad thing, given that most acquisitions disappoint. In 2019, Uber acquired Careem, a Dubai-based ride-sharing company, servicing 115 cities in the Middle East, North Africa, and Pakistan (very courageous), for $3.1 billion. Also, in 2019, Uber entered into agreements with Softbank, Toyota, and DENSO for a $1.0 billion investment by these enterprises in Uber’s autonomous ride-sharing business. These are potentially new sources of revenue growth, although investor patience is called for.

4. Risk factors. Ending on a lighter note, I turn to Uber’s risk factors. This is usually a long, boiler-plate list, written by lawyers, which no-one reads (like the side-effects and risk-factors of drugs). I looked for gems and found some:

We do not intend to pay cash dividends for the foreseeable future.

We have broad discretion in how we use the net proceeds from this offering, and we may not use them effectively.

The requirement of being a public company may strain our resources [definitely if the issue proceeds are not used effectively], result in more litigation and divert management’s attention from operating our business [a cheerful prospect].

If you purchase shares of our common stock in this offering, you will experience substantial and immediate dilution.

An active trading market for our common stock may never develop or be sustained.

Real downers for prospective shareholders, and this from a company which proclaims that its mission is “to ignite opportunity by setting the world in motion.”

This article first appeared here on SeekingAlpha.com on May 8, 2019.